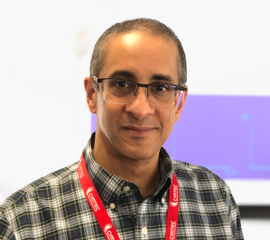 Dr. Ravi Menon is Canada Research Chair (Tier 1) in Functional Magnetic Resonance Imaging and Professor of Medical Biophysics, Medical Imaging, Physics and Psychiatry at the University of Western Ontario, where he is also a member of the Graduate Program in Neuroscience and the Graduate Program in Biomedical Engineering. He has served on numerous advisory boards, including 7 years on the Canada Gairdner Foundation and recently completed a term on the Science Advisory Council of the Alberta Heritage Foundation for Medical Research. He served for 7 years (the last 4 as Chair) on the Institute Advisory Board of the Institute for Neuroscience, Mental Health and Addiction of the CIHR. He was also one of Canada's two scientific advisory board members on the International Traumatic Brain Injury Research EU-NIH-CIHR consortium.

He is twice an awardee of Canada's Top 40 under 40 program and one of 20 recipients of the Young Explorers Medal from the Canadian Institute for Advanced Research. In 2015, he was elected as a Senior Fellow of the International Society for Magnetic Resonance in Medicine and the Canadian Academy of Health Sciences. He has held grants from a broad spectrum of agencies; CIHR, NSERC, NIH, McDonnell-Pew, Human Frontiers, ORDCF, CFI, OIT, ORF and an Ontario-NCE. He was in the first round of recipients of a Premiers Research Excellence Award, a Canada Research Chair and an Ontario Distinguished Researcher Award. He received a CIHR Foundation Award in 2016. He serves as co-Scientific Director of BrainsCAN, a $66M grant from the Canada First Research Excellence Fund and Principal Investigator of a $3M grant Platform Support Grant from Brain Canada.

My research area lies in the development of technology for ultra high field functional magnetic resonance imaging (fMRI) as well as understanding what it measures and tells us about human brain function. Driven by neuroscience questions posed by our colleagues, we develop new hardware (such as new radio frequency coils) and software solutions (novel pulse sequences) for fMRI. We utilize MRI scanners at 3 Tesla (T), 7 T and 9.4 T to understand the normal anatomy and function of both humans and animals as well as to understand the changes in anatomy and function that accompany disease and degeneration in the brain. These studies are done with colleagues in the hospitals and University, most notably in the Centre for Brain and Mind.

What are the smallest units of cortical organization that fMRI can identify and map in the human brain?

The brain is organized on many different spatial scales. At it's coarsest, one might consider left brain and right brain, each which specializes for certain cognitive functions. Then there are large sensory areas such as the visual cortex and the motor cortex. Within something like the visual cortex are 25+ areas specialized for different aspects of visual processing, and within those areas are even smaller structures like cortical columns. We are interested in mapping out these smallest of structures, understanding what they do and relating them to the development and operation of human brain as well as neurodegenerative diseases.

What are the contrast mechanisms that govern functional and anatomic contrast at ultra high fields in MRI?

MRI at magnetic field strengths of 7 Tesla and above can generate some novel image contrasts that we don’t fully understand. By studying the mechanism for these contrasts, we may be able to detect conditions like Alzheimer’s plaques or multiple sclerosis with much higher sensitivity. Along similar lines, we may be able to detect other processes, such as brain function, using different contrasts than what is currently use. Contrast can also be derived from more unconventional nuclei than water (used in normal MRI). Sodium, phosphorus and other important biochemical compounds can be detected using MRI as well.

How does one optimize ultra high magnetic field MRI scanners for human and animal brain imaging ?

While there are a number of ultra high field MRI scanners in use worldwide, their hardware and software is far from optimized. In order to operate such scanners within the human safety guidelines from agencies such as the US FDA, considerable work needs to be done. This involves the design of new ways of imaging (so-called pulse sequences) as well as optimization of much of the hardware, including radio frequency coils, our specialty. Making the use of ultra high field systems routine for human studies will allow go a long way towards making them diagnostically useful in research settings.