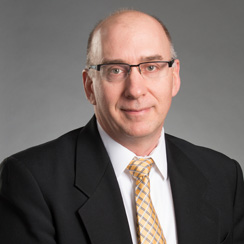 Dr. Bartha received his PhD in medical biophysics at Western University in 1998. He joined the faculty at Schulich Medicine & Dentistry and became a scientist at Robarts in 2002. During the past 18 years, he has served in a number of leadership roles including Acting Chair, Medical Biophysics from 2010 to 2011 and from 2015 to 2016. He has served as a member of Robarts Director Advisory Committee and Executive Committee since 2009 and was appointed Director of Imaging Research at Robarts in 2018.

Dr. Bartha’s research is focused on the development of high-field magnetic resonance imaging (MRI) and spectroscopy methods for the early diagnosis of disease and monitoring of treatment response, specifically related to neurodegeneration, aging and cancer. He specializes in high magnetic field imaging utilizing a 7 Tesla human MRI scanner, as well as 3 Tesla human and 9.4 Tesla small animal magnetic resonance imaging scanners. Dr. Bartha's work is highly interdisciplinary and involves extensive collaborations with basic and clinician scientists. He is a co-author on more than 150 publications and has given numerous invited presentations. He holds funding from the Canadian Institutes of Health Research, Natural Sciences and Engineering Research Council of Canada and the Ontario Brain Institute.

In addition to his extensive academic and research leadership, Dr. Bartha volunteered as a member of the board of directors with the Alzheimer Society of London and Middlesex from 2006 to 2012 and held roles as Secretary, Vice Chair and Chair.

Research is focused on the development of high-field magnetic resonance imaging (MRI) and spectroscopy techniques for early diagnosis of disease and monitoring of treatment response. We use primarily 3.0 Tesla and 7.0 Tesla human MRI scanners as well as a 9.4 Tesla small bore MRI scanner all at Robarts Research Institute. The group develops new methods for imaging structural and metabolic tissue changes, but also applies these new methods to the study of disease such as Alzheimer disease, stroke, and cancer. A major goal is to validate new imaging biomarkers of disease progression and build novel MRI tracers that highlight pathological aspects of a disease process. These studies involve a highly integrated team with expertise in physics, chemistry, cell biology, and medicine. Physiological and metabolic biomarkers of disease progression may have greater sensitivity to tissue damage than the imaging of structural changes.

Can Alzheimer disease be detected by MRI before subjects begin to experience cognitive decline?

Do metabolic changes in the brain precede structural changes induced by disease?

Widespread applications in many diseases including cancer, Alzheimer disease, and stroke.